My first trip on the metro of Saint Petersburg was with a beautiful charming girl called Alice.  This is entirely appropriate because when you enter the metro through buildings of various forms, you enter a strange and enchanted world which has more in common with alice in wonderland than the modern metros of dubai or singapore.

Before going through  the rabbit hole, you convert your money into magical tokens that let you pass into this world.  In this world there are no tickets to be inspected only a gold token that is sent through a slot which allows the door to open, and once inside you are free of any evidence you have paid for your fare.  My immediate reaction to this discovery was that it must be easy not to pay – but who knows what would happen in this world to those who are trying to cheat the system?  Alice gave me a warning that there is always a lady with a red cap at the bottom of the never-ending escalators and when I saw one for myself I knew that I would would always pay from then on.  It must be either in their job description or training, but these ladies have faces that say ‘don’t test your luck or your life won’t be worth living’.  More effective than any fine.

As mentioned earlier, to get to these charming ladies you must descend the longest escalators you have ever seen.  You suddenly really feel like you are part of a giant machine or organism that is filled with moving particles being piped around.  It is a surreal feeling to be in this dome and looking up and down the escalator realising you cannot see the start or the finish – just millions of people moving gracefully along at the same continuous speed – some going up, some going down.  The lights and the expressions on people’s face set the mood.  You literally pass hundreds of faces as you people-watch with no fear that you will ever see each other again.  Perhaps you even for in love a couple of times.  Alice tells me it takes 3 minutes and she can read two pages of her book in this time.  I can’t even imagine how far we have gone underground.  Somewhere along the way I have lost my sense of reality.  Once we finally pass the booth with the lady, we regain use of our legs to find our way to our little blue train that will take us away.  The platforms seem to be wider and shorter, somehow more appropriate for the comical old fashioned trains that they serve. 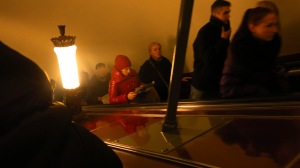 Finally it is time to enter the train.  The trains are coming all the time.  You don’t need to run to these trains – it’s better to wait til the next one where you have more chance of getting in the door.  Just think of yourself as chocolate being squirted into a mould on a production line.  For some reason during the three minutes of escalator riding it hasn’t occurred to me to take off my coat.  I guess such an awkward action would ruin the aesthetic of the ride for everyone, maybe this is why.  Well, now the chocolate is definitely melted as the temperature in the train reaches uncomfortable highs.  I guess I am happy though.  When everyone is awkwardly coping with ridiculous situations it always makes me smile.  Some people shut their eyes and I wonder if they imagine they are in a sauna.  A couple near me are flirting and hugging each other.  There is no space between people and not so many poles to hold on to, so people hold on to each other or wedge themselves between bodies. 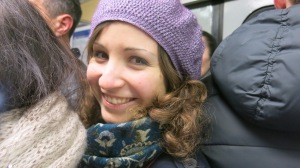 Maybe it’s the Russian accent, but I find the man making the automatic announcements highly amusing.  Such a deep serious voice, that I could imagine to exist in a futuristic world where we rely on such voices to think for us.  In fact maybe this voice has been taken directly from a movie I’ve seen.  If I understood what he way saying, I’m sure I would obey.  I survive the sea of coats and sullen faces and manage to exit the metro keeping sight of Alice as we all flood out the door. 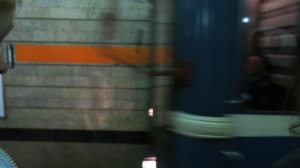 Every metro station is a little different, but there is always some mood lighting and interesting russian faces to look at.  As we ascend into the dark autumn night (which is surprisingly not as cold as I was expecting), I reflect on this simple machine that carts people around the city like they are particles.  For some reason, I am more accepting of the idea of being part of it than I am on modern metros – maybe because sometimes it’s easier for me to accept dreams and history than efficient modernity.

So with absolutely no organisation at all I just put together some little pieces of footage to create a mock trailer.  All footage except the interviews is with my little camera because I was too lazy to import all my other footage from the various hard drives.  I am still yet to go to Saint Petersburg or film in Sydney … but here we go … this is all a learning curve for me, so let me know what you think.

So, apparently this trip is meant to be a solo project, but I think I haven’t spent more than five minutes alone since I left for Morocco.  And it just so happens that I have met most of my companions while taking transport.  From the girl on the plane who spent 15 minutes negotiating with the taxi driver to get a good price to go to the city … to the guy I met at the train station who made sure I arrived safely, took me for a scooter ride, gave me advice about filming and invited me for lunch – it’s amazing who you can meet in the streets and on transport. 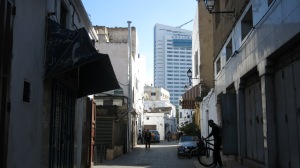 I guess the structure and interactions of transport are something that go hand in hand.  There is transport where everything is organised with maps and clean vehicles, places to validate your ticket, places to sit or to stand – you can get buy without needing help or without needing to enter anyone else’s personal space.  In Casablanca, I would say the Tramway is like this.  So I thought the Tramway would always be quiet, but then I noticed a couple of animated conversations between strangers (I guess that’s just the Moroccan way).  Then there are other modes of transport, which involve necessary contact with others as your are jammed into sharing seats with them.  I feel very much like I’m in a communal cocoon in the Grand Taxis which are Mercedes Benz cars that are built like tanks and built to last (and possibly built to carry six passengers and the driver).  You can usually start a conversation in the taxi with a need for guidance or a common complaint in such a vehicle.  While being in a Grand Taxi I learnt the art of making signals with your arms to indicate to passing drivers where you want to go.  This is very handy when no one can understand my pronunciation. 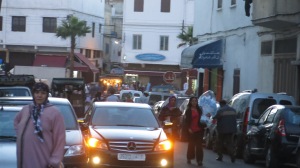 So it seems like it is easy for me to meet people and to experience what it is like to use transport at the same time.  However, this does not translate into people wanting to be interviewed in front of a camera.  I think this is going to be my biggest challenge but I’m guessing once the Moroccans start talking nothing will stop them 🙂 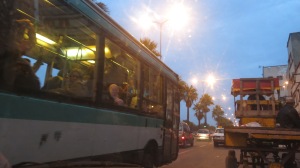