For some strange reason I thought the monsoon might discourage people from getting on the motor bikes or at least make it a little miserable.  But not in Pune!!!!  I keep hearing praise for the sensation of riding through the rain and the smiles of glee that accompany these statements.  The freshness and the feel of drops splashing on your body has always been something that I have liked while riding my bicycle but I though this sentiment was only reserved for the most quirky of us.  But in Pune, it seems to be mainstream. 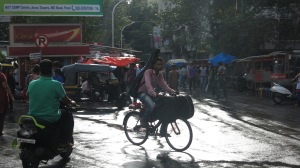 I am in Pune in the monsoon season.  This season of unpredictable rain and streets which turn into ponds is a delight to most people  in Pune that I have met.  And while the rain intensifies the traffic congestion and leads to you hopping between the less wet parts of the road or footpath, people tend to be more thanok with this.  I think this shows the way rain brings out the child in us.  We are allowed to play, to feel wet, like we are on an adventure, and to look around and feel that there is a community of people all experiencing the rain with you.  I guess that is the difference between me and people in Pune.  While I feel like I’m enjoying the rain alone as I look around to see everyone cooped up in their cars, in Pune there are lots of people on bicycles and motorbikes, so you can see other people enjoying the rain with you. 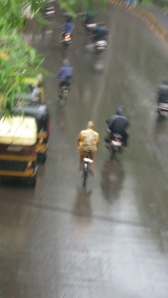 I went for a bicycle ride in the rain and it was pleasant enough.  There is an excitement and a fear that accompanies riding through a puddle of unknown depth with a bottom that could be anything from smooth bitumen to cow paddies and mud.  I am yet to be drenched but I still have a week to go!  Well, I hope you are enjoying riding around, and if it’s a fine day, don’t worry, I’m sure it will rain soon and you can look forward to that 🙂 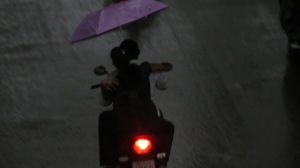 So I’ve arrived at Pune, after two planes, an overpriced taxi, a very crowded bus, a rickshaw, a leaking bus with Bollywood films being screened and finally two more rickshaws (with rickshaw drivers who tried to avoid using the meter).  But it’s worth it.  It is a beautiful lush city where I still don’t feel like I’ve seen the stress or sterile streets that one usually finds somewhere in a city.  I will keep looking, but for now it just feels like Pune is one large town. 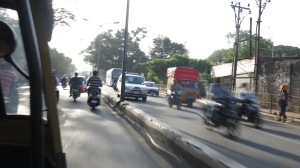 There are old buildings and tree lined streets.  Sidewalks are filled with trees, vendors and people from all walks of life.  The streets in general are full but they seem manageable.  They certainly keep your senses on the move as most vehicles are open to the smell of food, animals and whatever else is meandering down the street in one form or another.  You can also feel and hear sound everywhere.  In a rickshaw you feel like you are encased in the sound and vibration of the engine as it feels like they are ricocheting of every flimsy surface (it’s not surprising to see roofs taped together) the rickshaw has to offer.  But to your sides you won’t find any walls, only the motorbike rider who feels closer to you than a passenger would be to a driver in a car.  You can see the movement of the road below you and the interesting landscapes of the road, with ponds forming with the monsoon rains. 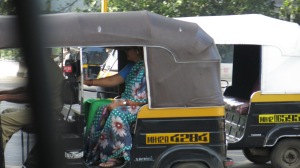 The state of the roads in Pune is highly variable.  While some roads are pothole laden and could be used as mountain bike course, other roads are very smooth and there are even some dedicated cycle lanes.  Pedestrians are given a high gutter to separate them from any keen motor bikes that might want to escape the traffic for higher ground.  But then sometimes there are no footpaths at all.  Then there are intersections – those amazing places where traffic literally has to find it’s way to where it wants to go.  Sometimes this doesn’t just involve the co-operation that I think is such a lovely part of the transport wherever it happens, it also involves strategy and a tactical discussion between drivers, riders, pedestrians and maybe a local guy who decides to come along and help the traffic clear through his neighbourhood.  I was happy when I was riding my bicycle the other day and a guy on a motorbike commended me for stopping the traffic to let a car through, which was blocking up the whole intersection.  It’s nice to know that there is encouragement for good behaviour on the roads (and good behaviour doesn’t just mean stopping at red lights). 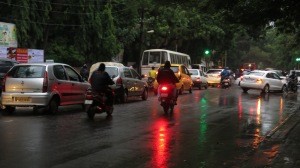 Just some images I’ve thrown together from my stopovers in singapore, bangkok and shanghai. I just put them together to a song by Pnau – it is not really a taste of what my documentary is going to be like, but it does show you some transport in different cities

Listening to music, looking at cute guys, maybe starting a conversation or just watching the world go past. So far it seems like an overwhelming number of people I’ve interviewed have enjoyed elements of catching the bus. They tell me about the different things they do, or how it gives them time to reflect on life, or even helps them solve problems. I guess catching a bus is a time when you are doing something – you are getting somewhere – but you don’t have any responsibilities. You can chat with friends or just enjoy the time that you have to yourself. Some people have told me that they catch the bus further than they need to from time to time. This has occurred when they have got caught up in an interesting conversation or have just wanted time to think through things. One girl exclaimed that she feels free when she is on the bus (maybe like the kites in the picture – but then there are always strings attached). 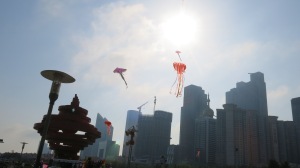 Lots of people say they love to watch other people on the bus or look out the window at the streets. I guess this is people’s chance to observe daily life. It is a chance to take in the community around them – not just the people they work with, study with or socialise with – but everyone who catches the bus. Some people who I have interviewed explained how seeing kind acts on the bus makes them appreciate and feel proud of the people in their city. On that note, so far both Vietnamese and Chinese people have explained to me that it is their tradition for young people to give up their seat for older people. I like that they think it is special for their country but I thought this was a worldwide fact (although my travels may prove me wrong). The joy of seeing a baby (a non-crying baby) on the bus is also something people noticed and that it would start a little community as people would play with the baby or talk to the parents. 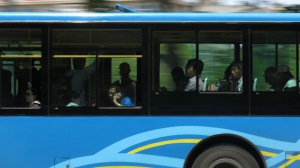 Of course the buses can be crowded and people have told me, almost with pride, that I must catch a crowded bus. I have caught some buses on my trip which have involved my arm becoming numb as I reach through the sea of people to an unclaimed space on the bar above my head. Some bus trips have involved body contact, the smell of everyone around me and the battle to squeeze through non-existent spaces between people to get to the door. On my last ride my friend told me I was brutal as I managed to barge through and practically kick the door open just as it was about to close on us. I guess catching a bus can bring out the inner beast within :P. 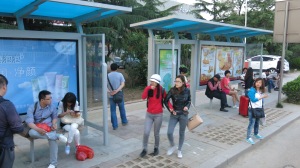 From a city where your motorbike was like a part of your clothing to a city that had banned motorbikes, I was in Qingdao, China. After 40 hours on a train I was looking through the train window and I was suddenly worried about the lack of people to see on the streets. My limited photography skills had been excited by all the moving organic shapes that were scattered throughout the streets of Hanoi on their two wheels. Now I feared that unless I could work out a way to look through tinted windscreens, there was going to be little else to see other than the shape and colour of four wheeled boxes. But I realised it was more than the potential for images that I was missing. I missed being on a motorbike and all the feelings and memories I associated with it… 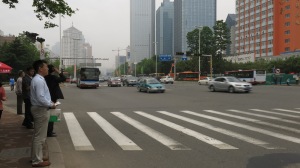 I had also heard rumours that Qingdao had forbidden riding bicycles along some of it’s streets so I was a little bit wary of the mentality behind the traffic planning here. However, the next morning I walked down the road and after a few minutes on the street I noticed all sorts of vehicles being driven along the paths and roads. The predominant vehicles were enclosed and had at least four wheels but there were remnants of Asia’s love of carrying all sorts of cargo on two wheels. It was cool to see a dirty old bike (illegally) sharing the road with overpriced Bentleys. 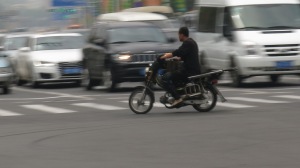 There were still lots of people to see on the streets. They were in the form of people walking along footpaths that one could only dream of in Hanoi or waiting for buses at modern looking shelters. The footpaths were separated from the road with hedges and trees and were a few metres wide. I actually think the landscaping was overdone and you would always see workers out, putting in new plants or ripping up pavements to repave them. At traffic lights they have put up umbrellas for pedestrians to wait under. This was a cute touch but I think the wind will get the better of them. 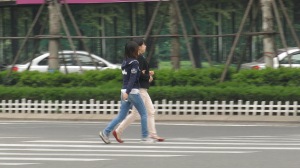 The bus shelters were large and large communities would gather around them. In fact bus shelters provided a hub of activity. In order to get my fix of people watching I just had to hang out near a bus shelter. There were people running for buses that weren’t in sight yet. People checking bus route signs that I couldn’t understand, looking at their mobile phones, chatting, or just looking around. As I zoomed in on bus shelters, I felt kind of snoopy but I also felt happy, especially after spotting a daughter telling an animated story to her mum. There is life in the streets of Qingdao! 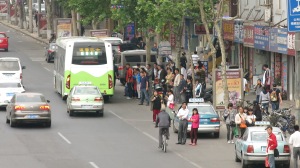 I was wary to film in China, so I had my little handheld camera working overtime as I pretended to be a snap happy tourist, so the quality of the shots might not be amazing.