I know that I am not suffering the monotony of using the same transport everyday.  Within the two or three weeks I spend in a city the ordinariness of using transport still escapes me.  In some ways it is amazing to be flabbergasted and interested in what local people do everyday without thinking about it.  However, I can’t help but wonder if there is a different beauty, which I can’t capture, in having urban transport as the background of your life rather than the focus (as is the case for me).

With this in mind, I set my alarm for an hour well before sunrise to accompany my friend and see the world of his everyday commute.  Being forced to witness this time of day always gives me a thrill, but I must try and imagine how this thrill would wear off if this happened everyday.  Well, it was misty and dark and then we passed a good looking zombie wearing sunglasses and listening to music.  As we walked to the metro my friend started to talk about the things he notices on his commute.  He passes the same girl everyday and can gauge whether he’s running late by where he meets her – she has become a clock to him – but one with a face and thoughts that one can only imagine (because one never talks to the people they see everyday).  We cross the road this way and that and I try not to take too many photos even though the light is beautiful.  We run across the main road as the green man is flashing and the sound for deaf pedestrians, which reminds me of a futuristic battle, makes the run that little bit more fun.

Then we go down into the world of the metro.  In Madrid, this is a world with limited signal for phones (from my own experience) and hence the people who are awake enough to read, are reading books.  I’ve noticed an abundance of book shops in this city and I think the metro is doing a good job at keeping book sales up.  I love watching everyone focused on their own little worlds swaying together with the movement of the metro.  It is a great display of collective individuality (unless everyone is reading the same book I guess).  Between my attempts to secretly film the feel of the metro and chatting to my friend, we arrive at our stop in no time at all.  We were standing the whole time but it wasn’t a strain.  If we were trying to read I guess it would be a different story. 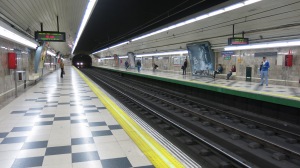 As we re-enter the world of natural light and traffic sounds, we head for the bus queue.  In Sydney I would always see these queues and feel sorry for the people in them.  Perhaps because it is a queue with no apparent door or window, like when we would have to queue up at school in arbitrary places for arbitrary reasons.  But the queue wasn’t so bad.  We were placed well – we didn’t have to wait too long and we would get a seat (provided no pregnant or older people needed it).  My friend gave me a bit of a guided tour as we went along, he described where the sunrise can be beautiful (if it’s not a foggy day) and where the bus sometimes jolts all the standing passengers as it picks up speed around the corner.  Today we were lucky because we had one of the good bus drivers – not the one that intentionally throws the bus from side to side (maybe he wanted to work on a theme park ride but his parents forced him to settle for the more stable career of being bus driver).

We get off at the stop before my friend’s work.  This is the better stop because he can see the mountains on a fine day.  It doesn’t matter that there is a big highway in his foreground, the beauty of his walk is found in the background.  I enjoyed hanging out with my friend and gaining insights into his transport world that I think an interview would have only given me a small taste of.  I guess my observation and presence changed his commute though – maybe this is why I gave up on physics.

I tried to fight the feeling in my throat that was telling me that a cold was coming.  I had just arrived late at night in Madrid and I was making my way to my friend’s house.  I was (probably illegally) taking my bicycle on the metro and hoping there wasn’t going to be too many stairs.  At the interchange, I left my spanish speaking friend, and ventured into the world of no comprendo alone.  However, within five minutes a girl started talking to me on the travelator (at that moment I had a desire to see what it would be like to ride a bicycle on a travelator but I haven’t tested this yet).  She made a huge effort to speak English to me and she was sweet and full of life – I couldn’t possibly be tired and sick – so I smiled and enjoyed her company all the way to my stop.  I was already amazed with this city and the public transport system, and it was probably because of this beautiful girl on the metro more than the connections and frequency of the services.

I have since collapsed in a heap on several occasions as the cold reared it’s ugly head.  Any feeble attempt to learn Spanish has been quashed by the loss of my voice, but the Spanish and their city are impressing me nonetheless.  I have been walking and cycling, catching metros and buses – and so far all is well.  People tend to be friendly, the streets are full of life and using the metro tends to be a smooth sort of experience.  There are plenty of motor bikes and scooters carrying elegant women and men in suits with a mediterranean flair.   There is an amazing park which you can ride through to get to other parts of town (reminds me of riding through centennial park to go to university in Sydney).

I am enjoying riding my bicycle in the streets even though there are less people on bicycles than in Berlin.  There are some cycleways and cycle lanes and it tends to be fun as you have to be more alert.  When there are less people on the road, you also feel like you are in on a secret that most of the city is yet to find out (the secret is that cycling in the city is awesome).  There are some hills in Madrid, but I think that just makes cycling more interesting.  I love riding past amazing monuments and buildings – being able to be playful around such works of art and grandeur.  So far I have had lots of (what I assume are) positive interactions with other road users (I need to learn more spanish to be sure).   Once I can speak, and hopefully speak spanish, I will have even more fun. 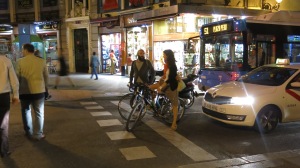 Sometimes I feel like I treat people as blank canvases when I ask them questions like ‘how does it feel to use a certain mode of transport’.  Life is much more complex than that.  We are hopping onto our bike, or jumping onto the train in various moods, with various things on our mind and after all sorts of things have happened in our lives.    And when we jump on in a happy mood our experience is completely different to when we have some melancholy or frustration.

In my ups and downs of travel and discovery along with the confusion involved in embarking on my own for a massive project, my mind and emotions have been going all over the place.   So there is nothing objective about the way I experience different modes of transport in different city, and I don’t expect this from anyone else.  So firstly I’d like to apologise for simplifying the world of using transport sometimes.  It is very hard to interview people with translators and get to the bottom of everything without taking up too much of people’s time.

However, I think transport plays an important role when we are suffering or enjoying highs and lows in life.  I have found myself crying on my bicycle from time to time, seeing smudges of light in the night streetscapes.  But there has been a beauty to being able to let the wind flow through my head my while I’ve been suffering some kind of heart ache.  It has helped me get over some of my troubles, and I can embrace the sensations of the moment to feel alive when I’ve felt numb.  In a different way, watching the world pass from a cosy public transport carriage has given me some space to let myself dwell on, and then expel, various problems that have been bothering me.  Perhaps seeing everything pass by lets me know I can let my problems go too.  It’s not always good, but it is amazing that we can get some psychological benefits from our transport from time to time.

When I’ve been happy and riding my bicycle, I have found myself hitting natural highs – like I’m floating – and I will break out in song and silliness with ease.  Sometimes on public transport or walking I’ve wanted to make everyone around my somehow smile.  And sometimes it seems to work.  I have walked like I’m wanting to dance and even driven in cars tapping on the steering while listening to the radio.  So happiness (or sadness) is brought on board when we catch various modes of transport, and the travel experience mixes with it, to give us something – sometimes for the better, sometimes not …. that’s just my take on it.