Yesterday started off as any other day … breakfast with a dash of yoga (my style of yoga is kinda more for the attention deficit amongst us so I’m not sure it is very yogic).   Then I had the keys to the lock of my friends bicycle – and this meant it was cycling around nairobi time.  And then suddenly my go pro started working again (my go pro saga has involved every permutation of turning buttons on and off, taking batteries and sim cards out, plugging it into the computer, reformatting and updating stuff – oh, and going on a go pro hunt through the shops of nairobi).

So, with a camera stuck on my head I headed out on the road, with my single speed, back pedal braking bicycle.  And it was fun!!!  I can’t believe how much joy riding a bicycle gives me.   Because I’m not riding everyday I think I’m appreciating each ride a little more.  I glided through intersections, trying not to stop because I hate starting when I have a fiddly back pedal brake to deal with (I don’t know how I’d cope on a fixie) and I spun my legs as fast as they could go.  I had many smiles and workers on the side of the road were asking me to give them a lift.  I felt as free as I have felt in nairobi.  I went along random little roads until I thought I would be testing my backwardsI will go for another ride soon and make sure I show you some of the footage in my film. 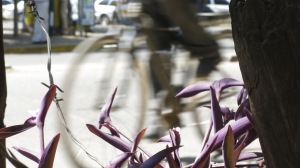 Next, was a walk to the shops – this involves some dubious road crossings and walking on half constructed footpaths with fumes from buses seemingly designed to be directed straight at the pedestrians – this could be a deliberate attempt to make people want to get off the footpath and onto the buses.  But I never feel alone on the street as there are always people walking somewhere nearby and there are often people gathered on corners – either boda boda drivers, people preaching to each other (btw preaching s forbidden on buses in kenya), and micro stalls – where a lady has a stock of 10 bananas, 20 tomatoes, a few avocados and maybe a giant mango.

So, after my walk fighting the buses, I found myself on one.  I sat there in silence just observing the various buildings, trees and skies that were outside the window.  I also noticed that everyone else was doing the same.  In Kenya everyone is seated on the bus.  It might be that you have to find ways to offset your shoulders and hips so that you can all fit on the seat (in a similar way you do when you put four people in the backseat of a car) but in one way or another you all have a seat.  It is fun to watch everyone’s head bob up and down as you look across the tops of the seats – there is almost something tranquil about it.  Perhaps the fact they are bobbing indicates the bus is moving and this is an exciting thing for a bus in the streets of nairobi which a jam packed full of traffic jams.

From bus to matatu – the major difference is that they are smaller in size and the guy hanging out the doorway is more intense in his search for passengers and the driver seems more intent on not fully stopping the vehicles for passengers to alight.  It is all about walking/running at the same pace as the bus at the moment you get on or off the vehicle.  Matatus are also more colourful and decorated and a bit quirkier in shape.  But at the end of the day you just sit there on the chairs that have material which might have come from your grandparents old carpet and you bob up and down – some matatus have soft ceilings for those extra big bops of your head.  They also have lots of stickings and signs with references to god and the fact he is in control and will take care of us – trying to provide comfort to passengers who aren’t too sure the driving is having any control.

So all these different ways of getting around was working my way up to a boda boda ride.  This is a motor bike taxi, where you are sometimes given a reflective vest and an oversized helmet to provide you with fake security.  Then you jump on the back of a bike and he takes you through the fastest and most interesting shortcuts possible as if you need to get to a bomb site to disarm the bomb and save the city.  We went through puddles, up little mounds, along something of a footpath, through tiny gaps that put bike couriers to shame, and of course along a road that isn’t open yet so you have to pass through a petrol station and up and down ‘gutters’ to pass the various obstacles that are trying to stop the superhero style driver from getting where he needs to go.  And then he stops at a random stall at a market and while I sit there wondering if he is going to dump me there, he is just doing some business before carrying on his way.  I made it safely home.  So that was almost a medley of transport in nairobi – I missed out on catching a taxi or being in a car.