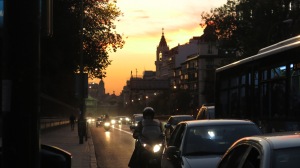 I tried to fight the feeling in my throat that was telling me that a cold was coming.  I had just arrived late at night in Madrid and I was making my way to my friend’s house.  I was (probably illegally) taking my bicycle on the metro and hoping there wasn’t going to be too many stairs.  At the interchange, I left my spanish speaking friend, and ventured into the world of no comprendo alone.  However, within five minutes a girl started talking to me on the travelator (at that moment I had a desire to see what it would be like to ride a bicycle on a travelator but I haven’t tested this yet).  She made a huge effort to speak English to me and she was sweet and full of life – I couldn’t possibly be tired and sick – so I smiled and enjoyed her company all the way to my stop.  I was already amazed with this city and the public transport system, and it was probably because of this beautiful girl on the metro more than the connections and frequency of the services. 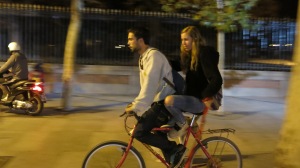 I have since collapsed in a heap on several occasions as the cold reared it’s ugly head.  Any feeble attempt to learn Spanish has been quashed by the loss of my voice, but the Spanish and their city are impressing me nonetheless.  I have been walking and cycling, catching metros and buses – and so far all is well.  People tend to be friendly, the streets are full of life and using the metro tends to be a smooth sort of experience.  There are plenty of motor bikes and scooters carrying elegant women and men in suits with a mediterranean flair.   There is an amazing park which you can ride through to get to other parts of town (reminds me of riding through centennial park to go to university in Sydney).

I am enjoying riding my bicycle in the streets even though there are less people on bicycles than in Berlin.  There are some cycleways and cycle lanes and it tends to be fun as you have to be more alert.  When there are less people on the road, you also feel like you are in on a secret that most of the city is yet to find out (the secret is that cycling in the city is awesome).  There are some hills in Madrid, but I think that just makes cycling more interesting.  I love riding past amazing monuments and buildings – being able to be playful around such works of art and grandeur.  So far I have had lots of (what I assume are) positive interactions with other road users (I need to learn more spanish to be sure).   Once I can speak, and hopefully speak spanish, I will have even more fun.