So I’ve been getting out and using transport and so far I have no scars to show for it (the only scar I have on my face is from hitting my head on a chair while frantically cleaning up before leaving Australia :P).  The main thing that has changed for me is an increased sense of autonomy and an understanding of what other people are going through when they are getting around their city of hanoi.  So in the heat I have pedaled, walked, ridden, waited and hopped on bicycles, motor bikes, taxis, buses and my own two feet to feel what it’s like to move around hanoi – I don’t have the grace, the poise or the compacency of residents who are familiar with the system, but I have one week to get there – so let’s go through my first attempts at the bicycle and then I’ll get back to you about my motor bike and bus experiences…

Bicycle – it was a fine sunday morning in the suburbs of hanoi.  With map in a hand and feeling generally comfortable weaving my way through traffic on a bicycle I decided I could ride to meet my friend in the wild west of hanoi.  This involved riding along two very wide roads which were connected by a more human sized street – I think around 10km in total.  I guess the vasts roads feel safe because there is lots of room but they are not pleasant, particularly in the heat.  It feels like there is heat radiating towards you from every direction and the space makes you feel very exposed.  I guess the only comforting things around you are the people and your fashionable face and body covering clothing (pictures to follow).  Riding a bicycle does allow you to ride as close to the right side (close to the curb) as you like as long as you are comfortable swerving for ANY traffic entering from the right.  It’s also important to be aware of the girl on the fancy scooter who spots some avocados she wants and spontaneously swings her machine to the curb to have an animated and seemingly long conversation with the avocado seller as she shakes the fruit to check whether they will make awesome smoothies.  Anyway, things happen on the road – people pull over, talk and text as if full concentration and being predictable aren’t too important to keep the road functioning…  and the buildings around you are actually really interesting – ranging from advertisement filled plain but colourful buildings to very ornate and interesting architecture. 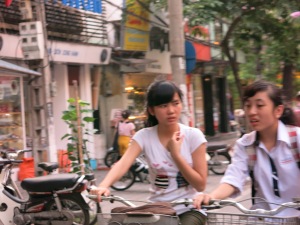 OK, I feel like I got destracted from my bicycle riding for a second there – an easy thing to do in hanoi.  I have to admit there is some shade and being close to the curb allowed me to take advantage of the trees that line sections of the road.  But then I did find myself wanting to overtake all sorts of vehicles and realising that my style of bicycle riding was probably a bit vigorous for hanoi because I was overtaking bicycles like they were standing still.  I guess I was hitting a high cadence on my little one speed pink machine.   Maybe I needed to learn to chill out and just cruise along or pick up passengers to weigh myself down.  The locals almost look like they are meditating as they pedal along.  I arrive at my destination after asking directions a few times along the way and feeling proud of myself for negotiating intersections where you feel like the movements of the vehicles and people could only have been co-ordinated to work through an arduous rehearsal schedule like it was a dance routine.  And when you ask local people how their traffic system works (as in how they co-ordinate between themselves who gives way to who) they look at you a bit confused and say they just drive slowly and it’s ok….

Once I arrived at my destination a young girl helped me out by telling me to park my bicycle around the side – and as I rode around I saw motor bikes and bicycles swarming towards a massive shed -there was about a hectare of underground parking for bicycles and bikes and it was all being used.  It was free to park my bike and I got a ticket and the corresponding number was drawn on my bicycle.  It felt like we were being processed as people lined up their bikes, gave their bags to a locker service and headed off to a typical suburban mall.

Since my first ride I have taken the opportunity to ride into the city.  On the more narrow roads you feel more like you are part of a river.  You know that the people around you that are heading in the same direction as you are protecting you and I guess you are protecting them.  There were a few times I didn’t want to stop or turn because it felt like a tide was pushing me along – but once you realise you can stop almost anywhere or turn left from the right hand ‘lane’ (there aren’t really any lanes), you realise you have lots of freedom and friends.  I guess the trick is not to get arrogant with your assumption that we are all giving way to each other.

Another interesting experience is dinking my housemate through the market.  Luckily my seat is a bit low as I had to stop a few times and tried to keep going without wobbling as there was no room for such nonsense – bicycles, people, trucks, motorbikes and chickens all shared the road and my passenger was carrying precious eggs for dinner.  The markets are lively and people seem unpredictable but yet bike riders always seem ready to move the right way to avoid them.  I guess the locals make it all look so easy ….