I would like to expand on an issue I brought up in my last post – cycling (or the lack thereof) in Ankara.   After buying a bicycle in Ankara I ended up hitting the streets of Ankara most days and I slowly learnt to be more comfortable on the roads.  I saw the occasional cyclist, I got to know how to get around and I had some lovely interactions with various road users while I was on my bike – I started to remember the joys of riding rather than being always on edge.  I met other people who also rode bicycles and they told me of the freedom it brought them, even within the struggles of Ankara’s traffic.  This brought me hope, and I felt like the feelings for cycling we were having could become contagious, with a little help from some cycling promotion and infrastructure from the local council.  At a personal level I could see a glimpse of momentum for cycling in this city, where I had felt nothing at first.

Along with my casual/normal riding, I also participated in a weekly group ride and witnessed a demonstration of the dangers of cycling.  Both events were influenced by the recent death of two cyclists, killed in separate incidences where attitudes and awareness of cycling in the motoring community were to blame.  It was an interesting experience for me to see these gatherings of cyclists in a city where I had struggled to see any presence of cycling.  My instant reaction to seeing everyone gathering for the group ride was glee.  It was great to see so many people caring about the conditions of cycling and other members of the cycling community, and for them to be taking the opportunity to ride together.  I liked that the group was showing the rest of the people on the road – walkers, drivers, bus catchers, everyone – that cycling was possible, it was something people were keen to do and most importantly our smiles showed that it could be fun. 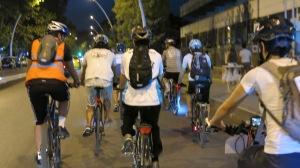 However, amongst the beauty of seeing so many people out on bikes together there was an emphasis on the dangers of cycling.  I could understand why they made the weekly group ride a memorial to the cyclists who had died and it was nice to show our respect while joining together to ride.  However, the demonstration which occurred the following Sunday made me feel ill-at-ease.   There was a theatrical performance in the park which involved people lying down pretending to be dead and injured.  Everyone who joined the demonstration were told to wear black and show sombre faces (no smiling or laughing).  I tried to gather what messages would come form such a demonstration.  There was a great turnout of people, so the first message was a support for cycling and the improvement of cycling infrastructure and culture to reduce the dangers of cycling.  But amongst this, I cannot help but feel that this demonstration was increasing the sense of fear the community has to cycling and reducing the images of fun and freedom that are part of the psyche of almost everyone I have met who rides in any city in the world.

So, I guess a starting point for community demonstrations about cycling should be what messages need to be portrayed to politicians, bureaucrats, people already cycling and the community at large.  Ankara has a huge way to go to make the streets safe and fun for everyone to ride but is it responsible to emphasise danger and give people a reason to fear cycling?  I think the importance of improved infrastructure needs to be in the minds of the bureaucrats, the economic, social and environmental benefits of cycling need to be drilled into the heads of the politicians and the community need to see that cyclists are humans like everyone else.  Everyone in the city of Ankara has to believe that they could one day ride in their city, and that when they are using the streets they should be looking after everyone that is sharing it with them, including cyclists.  These are just my thoughts – I know it’s a tough moment – when drastic changes are needed and cycling is such a marginal form of transport, that it seems easier to ignore it, but once things turn around and the momentum starts, I think it will be so worth it!

In my spare time over the next couple of months, I would love to be involved in developing a cycling strategy for this city.  If anyone has any information or ideas to help me, please get in contact.  Let’s see what we can do.