Berlin – I was told I would fall in love with you, but it’s very hard to fall in love when it has been predicted for you.  So I am still working out what my relationship is with this city that is a mixture of history, beauty and a somewhat laid back approach to life.  It just doesn’t seem to take itself too seriously.

My first impressions of Berlin were from the spacious interior of the express bus from Tegel airport.  I first spotted people riding bikes not too far into my journey, they were so casual and calm it looked like they were floating along – especially when you can only see their top half from the bus window.  Apart from the bicycle lanes the streets looked very hostile for cycling – big roads with no shelter – highways and bi-ways style.  However, as the journey went on, I started to see more ornate buildings, narrower streets and trees filled with beautiful green leaves.  It suddenly felt like a village – a very big villages with lots of incredible buildings.   Apart from my chance to look around, the bus trip also allowed me to discover the no-nonsense, almost stoic nature of the female bus driver.  At one point the bus turned into a road which had roadworks and a truck was parked facing the wrong way on our side of the road so we couldn’t pass.  The bus driver turned off the bus and went to talk to the truck driver to hurry him along.  I guess she wasn’t happy with the idea of her bus being late – Germany has a reputation to keep – so the truck moved out of her way bloody fast.  Although everyone warns me that Berlin is one of the most relaxed cities when it comes to schedules, compared to Malawi, I’d say everything runs like clockwork here.

Now that I have been here for a week, I can safely say I have lost all sense of direction.  I’m not sure if it’s the city, or the fact that I’ve been sleepy for the last week, but on a number of occasions I’ve found myself going in the opposite direction to the way I thought.  I usually pride myself on my navigational skills, but here I am turning maps around (or turning my head around when the map is fixed to a bus shelter) in disbelief while trying to make sense of the streets around me.  Thankfully most bus shelters have maps inside them so I can recheck where I am again and again.  I blame my disorientation on three things – streets that are not quite straight but appear pretty straight to me, metros that take you underground and twist you all around the place before you reappear in what seems like another world, and thirdly long german names for streets and metro stops – with some that start and end the same but have different gobbledygook in the middle.  This disorientation makes me feel a little bit frustrated from time to time (because I cannot go anywhere with efficiency or with any certainty), but more than anything I feel a lack of autonomy. 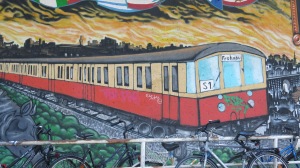 I am hoping that once I start riding a bicycle this will improve both my sleepiness and my sense of direction, otherwise I’m going to be riding around in circles with my eyes shut.  I feel like Berlin is almost safe enough to do, but don’t worry mum, I won’t try this just yet.